From One Kitchen Table to 30 Candles: MCC Celebrates Another Anniversary

This month, MCC reached a new milestone – marking its 30th year in marketing communications. Since 1986, the agency has partnered with B2C and B2B brands to provide full-service, integrated advertising, public relations and social media marketing. Much has changed over the past 30 years both with the agency and in the industry, and MCC continues to adapt to best serve its clients.

The world was much different 30 years ago. Ronald Reagan was president, the Chicago Bears were Superbowl XX Champions, and “Top Gun” was the highest-grossing box office hit. MCC was also much different back then. As the sizzling Texas summer was coming to an end, Mike Crawford laid out plans for his new company on his kitchen table. In just three weeks, the newly incepted agency had an operating budget and an expanding client list. Crawford’s startup quickly blossomed into a successful marketing communications agency. 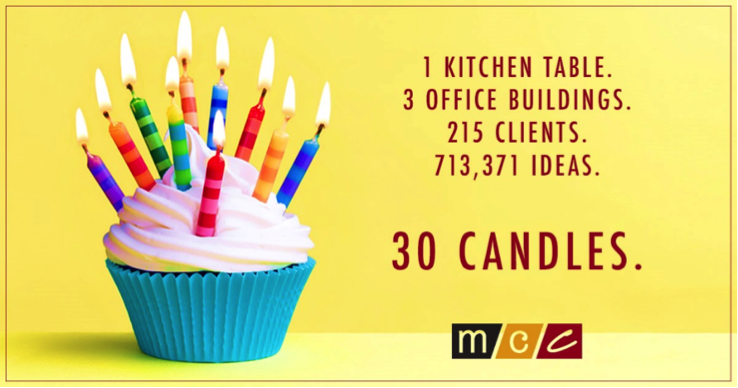 In the 30 years that followed, a great number of people have influenced and helped create MCC in its present form. Since the early days in Crawford’s kitchen, the agency has worked with some of the world’s largest companies, including Texas Instruments, Harris CapRock and Chuck E. Cheese’s. It’s not just the big guys who have contributed to MCC’s success, though. Throughout the past few decades, each one of MCC’s clients have helped build the success of the agency.

“Looking back on what has been accomplished in the last 30 years, a great many thanks are due to the people who helped me build this agency into what it is today,” said Crawford, who remains MCC’s active president. “To the people who have been by my side the whole way, to the staff who have put in countless hours and hard work, and to the clients who have entrusted their business to us, we thank you.”

Through hard work, dedication and innovation, MCC has become a dominant player in the crowded world of marketing communications. Often thinking outside the box, the agency has implemented many strategies for success over the years. As this innovation and creativity has played a role leading to MCC’s success, the agency continues to strive for and live the unexpected.